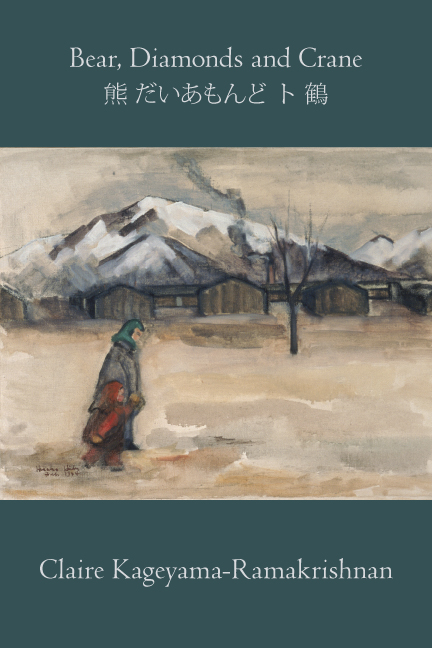 Bear, Diamonds and Crane depicts the struggles of the Sansei—the grandchildren of Japanese immigrants—with drugs, body image, naming, inherited family lore, and with neighborhood racism. She traces the Sansei’s experience uncovering their parents’ and grandparents’ lives from fragmentary answers and silences: “There is truth here, in the gaps and lapses, but don’t ask where.” In villanelles, haiku, and lyric poems collaged from family letters, Kageyama-Ramakrishnan recounts the meaning of “Forgotten Names” on her maternal grandparents’ side (“Tsuru,” Crane, her grandmother’s maiden name, names a legendary Japanese creature which was a symbol for peace, longevity, fidelity). In “Trailing Fragments: Things to Keep Inside a Bento Box,” she shows how our varied experiences of the world fit alongside each other, “coppery tones for a flight to Europe […] tortillas at a taco stand between Venice and Santa Monica […] blue envelopes with coconut flakes and sugar, box / housing us.”

In this collection, personal narratives take their place alongside group stories, “the wound” that “resists erasure and cultural amnesia. […] the image of barbed wire.” Kageyama-Ramakrishnan reflects on the life of her grandmother, who “acquiesced on impulse” to marry and move to the United States on the U.S.S. Jackson as well as on stories from Manzanar, the concentration camp where Japanese Americans were interned during World War II. “Perspectives on People of Japanese and American Descent” recounts a father left rubbing “his eyes free of debris behind walls/ that should have protected him,” reminding us that hope can seem far off. Yet Bear, Diamonds and Crane does offer hope: one child paraphrases the memorial plaque at Manzanar as “May the injustices of racism/ and hysteria never occur again,” and Sadako Sasaki’s protest against the atomic bomb echoes through the book: “After Hiroshima and Nagasaki, / Sadako Sasaki folded / a thousand cranes/ for world peace.” Even as Bear, Diamonds and Crane is haunted by the past resurfacing—some fearing “the dead calling them back,” another visited by a ghost who “return[s] in an olive pinto / asking me if I need / another ride,”—it hopes for children “holding cranes/ instead of rifles” and looks to the fourth
generation, the yonsei: “For you, I will keep the ripe weight,/ plums, apricots, budding persimmons.”

La Grange on the west side
of Los Angeles.
A new generation

The grandparents are Issei.
The parents, Nisei.
The children are third to wear