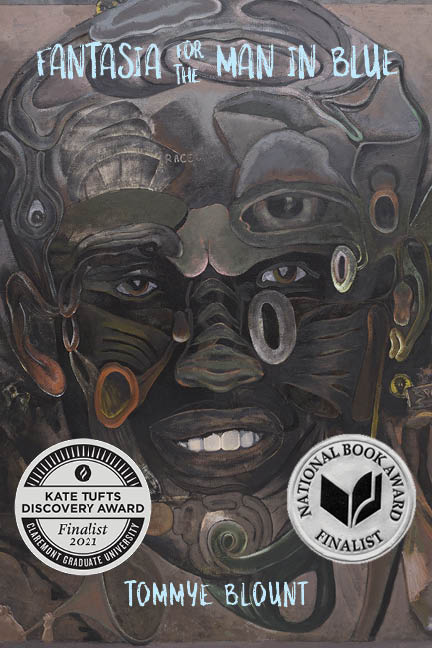 Fantasia for the Man in Blue

Finalist for the National Book Award in Poetry.

Finalist for the Kate Tufts Discovery Award in Poetry.

Finalist for the Hurston/Wright Legacy Award in Poetry.

Finalist for the Lambda Literary Award in Gay Poetry.

Finalist for the Julie Suk Award.

Finalist for the 2020 Big Other Book Award for Poetry.

Longlisted for the Believer Book Award in Poetry.

Received a starred review in Booklist.

In his debut collection, Fantasia for the Man in Blue, Tommye Blount orchestrates a chorus of distinct, unforgettable voices that speak to the experience of the black, queer body as a site of desire and violence. A black man’s late-night encounter with a police officer – the titular “man in blue” – becomes an extended meditation on a dangerous, erotic fantasy. The late Luther Vandross, resurrected here in a suite of poems, addresses the contradiction between his public persona and a life spent largely in the closet: “It’s a calling, this hunger / to sing for a love I’m too ashamed to want for myself.” In “Aaron McKinney Cleans His Magnum,” the convicted killer imagines the barrel of the gun he used to bludgeon Matthew Shepard as an “infant’s small mouth” as well as the “sad calculator” that was “built to subtract from and divide a town.” In these and other poems, Blount viscerally captures the experience of the “other” and locates us squarely within these personae.

lands on my pretty man’s forearm. Harmless,
it isn’t deadly at all; makes his muscle flutter
—the one that gets his hand to hold mine, or
ball into a fist, or handle a gun. It’s a ladybug,
or an Asian Lady Beetle everyone mistakes
for a Ladybug—eating whatever
it lands on. My pretty man is asleep—at ease, or
plotting like the bug. Or maybe the bug
is a blowfly—eating my pretty man’s tan
from his pretty arm. My man swats it
without waking, as if he’s dreaming of an enemy,
or me. When my pretty man isn’t asleep
he’s got a temper.

No, he is not
asleep. He’s wide awake and wants me to tell you
I’m wrong. Blowflies don’t eat skin,
they lay eggs on skin. He knows all about
blowfly larvae. Napoleon used them
to clean war wounds, my cold pretty man
says in that pretty way,
with his cold pretty mouth. He’s eaten plenty
of bugs before. On night watch,
over there. Over there, they’re everywhere.