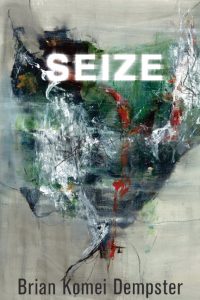 Winner of the Julie Suk Award in Poetry

Finalist for the Eric Hoffer Book Award in Poetry

Finalist for the National Indie Excellence Award in Poetry

Featured twice by RHINO: in a graphic review and an editorial review

Seize, Brian Komei Dempster’s follow-up to Topaz, spares no one the highs and lows of fatherhood. The speaker struggles to care for his young and ailing child—a child whose many medical problems create an obstacle course of moral and emotional dilemmas. How does a father come to terms with the large and unknowable mysteries of a child who cannot communicate in a “normative” way? How does a parent—especially one who is dependent on language—guide a child without the use of speech? And how does one become the parent of another when their own uncertainties, their own wounds—intergenerationally from war, from strained race relations, from constantly being denied a place to belong—are still healing?

I miss exits, veer
through the world
dangerous. Drive

with earplugs, strain my neck
to check if my little boy

is all right. At home I wear headphones
to block out
his squawks. In my own

bird cage. Shut up I yell when he breaks
through. Squeeze his cheeks

hard. Hold him by the shoulders. Be quiet. A flock
of seizures. His fingers claw
into my wrist. He says so

little. I can’t shut him
out. His good arm flaps. Shadows swoop

my dad says. If my boy is quiet, his friends
will like him. When he screams, neighbors could think

I’m hitting him. I strain
to hear the radio, cry
when I drive

to work. A blackbird can be seen
thirteen ways. I fly to retreats to write

about him. When I come
back, he is still caged. I shampoo
his hazel hair, and he soothes me

in his wheelchair. Poor little guy
my mother reminds, so much to say
and no words. His mind a deep sky

she believes
he will rise into.