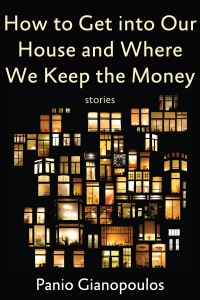 How to Get into Our House and Where

We Keep the Money

In this collection’s tour-de-force title story, Ethan, a marketing manager for consumer goods brands, finds himself in a bizarre stand-off with his wife, new boss, and daughter’s swim teacher over the sudden presence in his life of Scudder, Ethan’s graffiti-artist nephew. Before long, Ethan is defacing his boss’s office with dry-erase markers and climbing a condemned building in the dead of night. How swiftly, Gianopoulos reminds us, we become the very thing we’re trying to avoid; how soon we find ourselves at the point of no return: a guy whose high school girlfriend has just “asked him to break her leg. Behind the dormitory was a stack of cinderblocks and she told him to drop one on her knee and send her home.”

A love song to the power of the inadvertent and unplanned, this collection tracks a gaggle of lost souls—an anxious medical student; a man jealous of his girlfriend’s love for her tiny Pomeranian; and a restless free-diving housewife–as it captures “that itchy, panicky feeling you get when you suspect you’ve stepped into the slowest line at the supermarket.” Its characters persist in lives pock-marked with awkwardness, continually in search of “another parallel version” of themselves. Amid their domestic mayhem, Gianopoulos finds humor and warmth, an animal curled up around a protagonist’s ankle “like a misplaced comma.” How to Get into Our House and Where We Keep the Money is a witty, telling, urbane exploration of the clumsiness of relationships, of the small wars and gigantic missteps that shape our lives with our nearest and not-always-so-dearest.

From “I’ll Be Your Fever,” from How to Get into Our House and Where We Keep the Money:

“Hey,” Ted said, striding over to him. “I know we’re tight on time. I’ll go introduce myself and take the groom party getting ready. Unless you want help with the bride first . . .”
“You said you weren’t bringing her,” Byron said.
“Yeah, but things got—don’t worry, she won’t get in the way.”
Byron leaned forward and whispered, “Have you seen this place? This isn’t the fucking police academy rock garden at twenty-five a head. They’re not paying what they’re paying to have a photographer’s kid crash the big day.”
“No one will even know she’s here,” Ted said. “She’ll sit off to the side somewhere.”
“I’m serious. I only offered you today because you promised me you’d come solo. I can’t have—” He broke off. “Jesus, she’s already at it.”
Ted spun around. Stella was tugging on a yellow tulip, coaxing it into decapitation.
“Sweetheart,” Ted called out. “Please leave the flowers alone.”
“It was already loose,” Stella replied innocently, holding up the severed tulip by the stem.
“This is your last chance,” Byron said. “I’m serious. If she ruins today’s shoot, you don’t get paid.”
Ted carried his bags into the house and, after setting up Stella with his iPhone on a nearby couch, began to photograph the groom and his groomsmen. Ted was a graceful and accomplished photographer, and he didn’t know what was more demoralizing: that he was working as a second shooter for Byron, who had the perspectival ignorance of a pre-Renaissance painter, or that he was terrified he would lose the job. His photography career had always been a matter of vigorous tension as he balanced financial necessity with creative fulfillment, but after Emily died and he became the sole provider for Stella, he took on whatever assignment came his way. With rent and utilities to pay, diapers and food and clothing to buy, and preschool tuition and babysitting fees to cover, concern about the trajectory or integrity of his career had become an unaffordable luxury. Actor headshots, high school senior yearbook portraits, second shooter gigs for weddings and bar mitzvahs, pet birthdays . . . so long as it paid decent money, Ted shot it. There was better, more remunerative work out there, but Ted needed infusions of cash quickly and often, and he could not, like Byron, spend years patiently building a referral network by offering deeply discounted shoots to targeted high-end clients. He couldn’t patiently do anything anymore. Ted did everything in haste now, even worry, and within a few minutes he had pushed aside his distress at the prospect of losing his fee—a tenth of what Byron would be receiving—and was arranging a tableau of uncooperative young men in tuxedos.