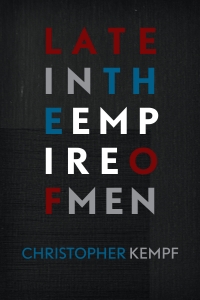 Late in the Empire of Men

Late in the Empire of Men, Kempf’s powerful debut collection, reads the author’s coming-of-age in Ohio and California against the westward trajectory of American history, a trajectory he simultaneously situates in the larger context of empire—both political and anthropocentric—by looking back to Rome and Carthage and by glancing forward to a time when, as he writes in the poem “Dominion,” “the idea of people/ is over.” Employing a baroque layering of image and allusion, patterned sonic texturing, and post-narrative self-consciousness, Kempf reveals how commonplace rhetorical practices—football’s valorization of a “warrior ethos,” for example—work to conscript young American men, in particular, into patterns of thought and behavior constitutive of an imperialist state.

“High School Graduation Party,” from Late in the Empire of Men:

more lasting than a Sunday afternoon in Ohio, in the sunlight, with cake & bunting, I admire, still, their studied turning away. Who wouldn’t? In a different century, we would send them to war.