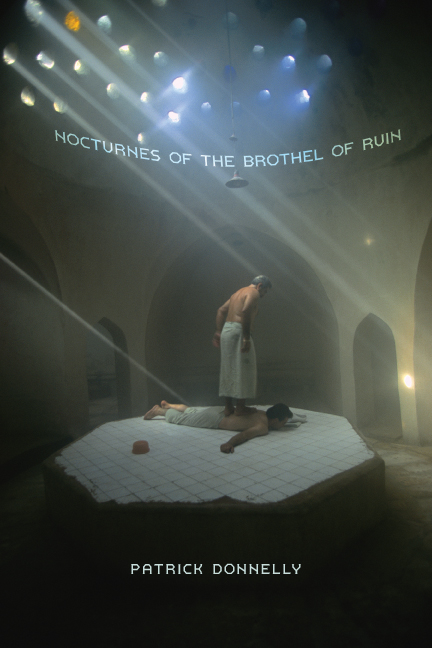 Nocturnes of the Brothel of Ruin

Patrick Donnelly’s masterful Nocturnes of the Brothel of Ruin alludes to the Sufi idea of the “tavern of ruin,” a disreputable place where one risks losing reputation and self-identity yet might gain spiritual knowledge by studying human love, in all its forms, and making costly mistakes. These poems explore such ruin in the shape of loneliness, the onset of old age, a sense of mortality, getting sick, infecting loved ones, the loss of cherished possessions. They reflect on the ways love and sex can harm us—our bodies, our contentment, our sense of self—yet grant us an almost spiritual knowledge of the human. From the sexual abandon of the 1980s gay demimonde, to a New England mill town whose mill has closed, to a mother’s decline into mental illness, Nocturnes of the Brothel of Ruin describes hurt places and people in order to also describe the knowledge and the spirit that comes after loss, the song that responds to the darkest predicaments.

Including translations (with Stephen D. Miller) from the thousand-year-old Japanese imperial anthologies of poetry, this volume shows how others’ histories might inform our present. The Japanese imperial anthologies offer a structural model for Donnelly’s own book, in which a central speaker is addressed, and often corrected, by several other voices. This speaker, born into a world where love is a fever, a sickness, rushes out of the womb with “the bloody flag of my attachments,” ready to face the agonies of love rather than “remain behind […] like an unlit lamp.” Nocturnes of the Brothel of Ruin is the story of that headlong journey, the lessons learned—painfully, joyfully—along its paths. In one poem the speaker addresses himself thirty years younger, warning “if you try to hunger or love more carefully / no one from the future will breathe your name”; in a translation, he realizes he mistook” for today’s spring mist // […] just the smoke of wood…” From parables to elegies, from addresses to poignant vignettes, this far-ranging collection is a celebration of life lived to its fullest, a making peace with “the tight budget of years / left me.”

“Prayer For Immunity in Grand Army Plaza,” from Nocturnes of the Brothel of Ruin:

At a quarter to dusk
a moon froze in the groin of an elm,
horses on the arch dragged their bronze wagon
through Brooklyn toward another war.

When I was young in the desert they warned
never walk arroyos when it rains,
water can crash down those gullies
in minutes, from a hundred miles away.

This street I love
could come apart that fast,
like bread in water.

Does everyone in danger pray
the same stupid prayer?—
strike the next house, the neighbors
who had their love all along.

I found my life so late—
leave me a little time
to love his grayblue eyes forgiving
what is unworthy in mine.