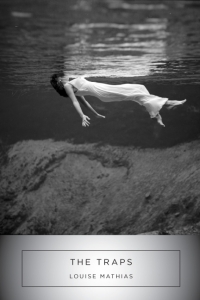 In The Traps, Louise Mathias’s second collection of poetry, the reader is pulled through “border towns of citrus and blood” and forests that “grow sparse as a beggar’s dress,” while experiencing the voice of a poet that is unrestrained by a straight-forward narrative thread; rather, Mathias grounds The Traps in a rich mix of imagery. Dense in form, these compact poems exist in an unbridled imaginative realm. Within this realm, the poems dance between beauty and brutality, terror and temptation: “There’s the theory / of the girl; the one that // was holding wisteria. // Which, when you get right / down to it, strangles trees.”

The poems’ stunning, often melancholy, lyricism—“thumbs drenched in paraffin wax,” “sand-soft husks of a walnut”—creates a sense of loss and longing, and places us in an eerie world marked by a persistently honest voice. This voice sporadically surfaces to confess, “He posed me like a dead girl and I liked it,” and to question“You’re dying, don’t you know?” Often focused on imagery of constraint, as the title suggests, “in the narrowest spaces,” and “tied to the rafters,” these poems deftly describe life’s traps—what it means when they hold us tightly and what it means when they let us escape.

“Admonishment,” from The Traps: