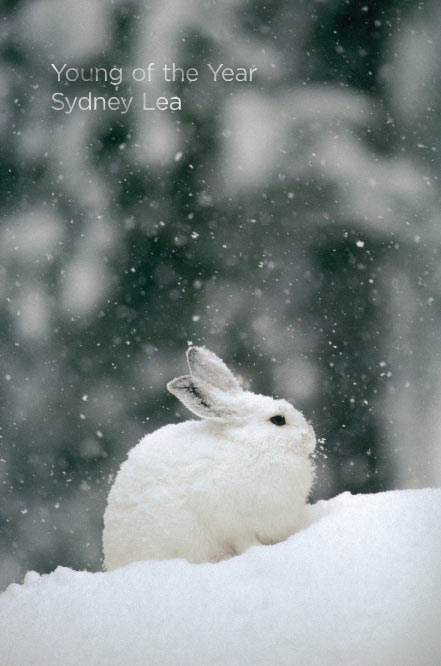 Young of the Year

Sydney Lea’s eighth collection of poems, Young of the Year, takes its title from “the term our old folks use to name / a prior spring’s wild things.” Casting a candid, contemplative look back at a life lived, and out at a world alive with motion, where “kinglets were suddenly flying / from his south to land all around,” Young of the Year offers a vital account of human life against the awesome scale of the kingdoms of animals, memories, and geology alike. These poems stretch out considered, affective sentences that equally call to mind the heady “wail and whisper and funk” of musicians like Clifford Brown and Clyde McPhatter, the New England musings of Robert Frost, and Robert Penn Warren’s narratives and anecdotes. Engaging in a respectful “Dispute with Thomas Hardy,” Lea pledges to “cling / the harder to gifts apparently given // without my having at all to deserve them: / flowers, animals, glinting trees.” Like Hardy, Lea is a poet sensitive to the detail of nature: not a Nature Poet, lost in metaphor, but a figure amid often-daunting environments recalling a time “He dug under feather and flesh / for the sparrow’s heart, a steaming purple pip / forever reduced to stillness.”

The magnificent extended series “Birds, a Farrago” narrates the gradual onset of “symmetric” post-viral arthropathy: the speaker’s muscles slowly seize, rendering him a watcher, headed deeper “into the raven-black cave of self.” Asking for miracles even as he knows he lives “amid such blessedness” as his “oldest child’s / first child, the nails of her fingers so tiny / and nacred,” the speaker of these poems places his faith in a nature valued for its struggle, in the hope offered by a heterodox Christianity, and in a lone, dissenting doctor, the fondly depicted “milady” who refuses to buy the rheumatoid diagnoses of high-end medical clinics. Here, as elsewhere in Young of the Year, Lea poignantly traces the intersection between the worlds of nature, science, and the spiritual.

I Was Thinking of Beauty
Here
No Doubt the Nameless