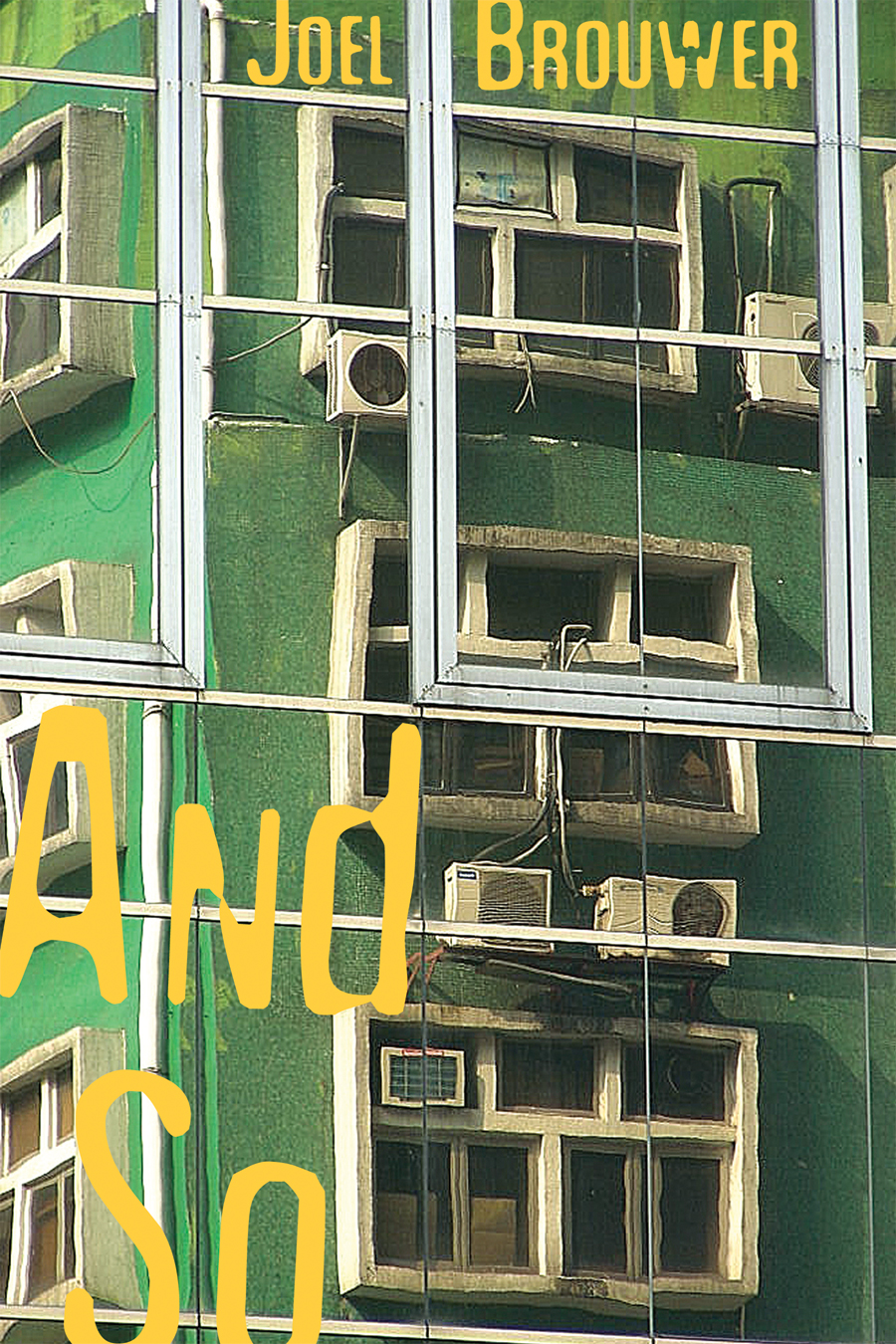 Joel Brouwer’s And So is a cynical yet energetic study of the ways we account for the lives we lead.
“Which you are you?” one poem asks, while another surprises itself by switching from third-person to
first-person: “but what am I doing in here.” Another relates an anecdote about reality, representation,
and anecdotes themselves: “When someone told Picasso his portrait/ of Stein did not look like her, he
said It will. When someone told Picasso that Stein did/ not look like her portrait, he said She will./ The
story has been told both ways. Which is/ itself another story.”

And So, Brouwer’s third collection (following Exactly What Happened and Centuries), watches lovers and
strangers coupling and recoiling, and marks the moment of coitus as one which separates as much
as it unites. Original and exact similes (“The puppy sniffs the dry, leaf-choked gutter/ like a bored
sommelier”) lend texture as Brouwer’s evocatively-portrayed characters—so often you and I—are
caught up by the need to tell their stories and the responsibility to accept them, “already masters of our
narratives/ and their every potential variation, violation, and volition.”

These stories enact Aristotle’s understanding of tragedy, in which anagnorisis (unexpected recognition),
hamartia (an error in judgment), and peripeteia (a sudden reversal) take place not on the stage but in
our daily lives, where a young wife is “told/ by the orange juice carton’s cap that she is/ not a winner.”
Brouwer’s deft line breaks allow events and their consequences (or lack of them) to fall down the page
with equal inevitability and unease. As “Peripeteia in a Soggy Snapshot, Featuring Lines by Ashbery
and Pronoun Confusion” suggests, we are not always the protagonists of own lives, or of anyone else’s:
“One thing is for sure: we have come/ to resemble them, but they no longer do.”

Book-ended by poems which address what knowledge, if any, “the poem can now report,” And So
ponders how we narrate our lives to each other and to ourselves: “We wouldn’t know until the snapshots
came back/ how beautiful we’d been. How the next motel/ would later loom into view unique […] How
each/ and every next would always be before.” At stake here is not only Shakespeare’s paradox of truthtelling
(“When my love swears that she is made of truth,/ I do believe her though I know she lies,”
Sonnet 138), or Emily Dickinson’s “Tell all the Truth but tell it slant—.” Brouwer’s masterful book, with
its poignant lacunae and recurrences, offers an unstinting look at how separate our lives together are.

At left a yellow flat of sunlight leans
against a raw brick wall. Two cats—one white,
one black—slump along the vast windowsill
as if drugged. Their little fangs glisten.

A suggestion of steeple beyond the window,
coupled with a recording of children
shouting in the imaginary square below,
conjures an older quarter. Red sofa stage right.

Coffee table strewn with breakfast’s remnants.
Dish of bloody berries, greasy pages torn
from a pastry, a coffee cup set down
absently, tilted on its saucer. And

on the sofa she’s reading newspapers.
The world is dramatic but not tragic.
A stagehand lifts the hem of her dress,
shakes it softly, lets it fall, and exits.

Music squeaks weakly from an old radio.
A vase of tulips sighs on a shelf.
All is in its best place under its best dust,
and in the wings his line stalls in his throat.