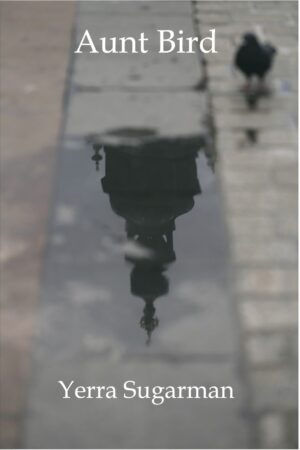 Aunt Bird is an astonishing, hybrid poetry of witness that observes and testifies to social, political, and historical realities through the recovery of one life silenced by the past. Within these pages, poet Yerra Sugarman confronts the Holocaust as it was experienced by a young Jewish woman: the author’s twenty-three-year-old aunt, Feiga Maler, whom Sugarman never knew, and who died in the Kraków Ghetto in German-occupied Poland in 1942. In lyric poems, prose poems, and lyric essays, Aunt Bird combines documentary poetics with surrealism: sourcing from the testimonials of her kin who survived, as well as official Nazi documents about Feiga Maler, these poems imagine Sugarman’s relationship with her deceased aunt and thus recreate her life. Braiding speculation, primary sources, and the cultural knowledge-base of postmemory, Aunt Bird seeks what Eavan Boland calls “a habitable grief,” elegizing the particular loss of one woman while honoring who Feiga was, or might have been, and recognizing the time we have now.

Her life was like a thick soup in
my mouth. Her name the Yiddish
word for “bird”: Feiga. She wiped
a grain of soil from her lips, and I
could hear the meat of her voice
speak. It climbed up and down
my mind, so that she inhabited the
core of each thing.