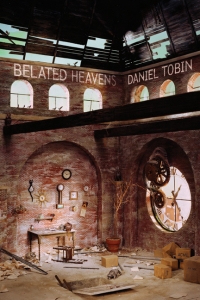 In the title poem of Daniel Tobin’s far-reaching fifth collection, Belated Heavens, the seemingly effortless inflation of an air mattress “out of nothing, so nothing fills [it]” playfully calls to mind “the turtle of creation” as it “swims through time.” Tobin, masterful bard, observes thought-provoking harmonies across grand scales: in “A Palm Print at Lascaux,” the speaker reaches out, Alice in Wonderland-style, to set himself within “the steppe / alive in limestone.” Belated Heavens paints the interconnectedness of past times and distant places, from the possibility of an afterlife—“your many dead still nearby / watching you from behind your life’s one-way mirror”—to the “manna in the marmoreal air” of a “Winter Storm, Jerusalem.”

Belated Heavens critiques the “palpable cliché: / art is the bulwark of our fear.” The poet’s work makes him a documentarian who speaks meaningfully where “talking heads drone on.” Tobin’s wit delights—a riff on Frost’s “Mending Wall” inserts “hydrostatic pressure”—but also teaches wisely: you “walk among remnants / of a lost world, even when its not your own.” Using villanelle and paradelle, free verse and blank verse, terza rima and the blues, Belated Heavens weaves diverse iconographies: Babylonian gods, medieval cartography, paparazzi, Neanderthal DNA, the extinctions of languages and species. Tobin sees the world’s sweep and crystallizes it in its troubling fragility; he reminds us that knowledge itself is all too often belated.

Blood Labors
From Nothing
The Net
Second Things
The Narrows