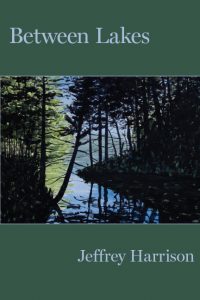 Longlisted for the Mass Book Award in Poetry

Finalist for the 2021 Paterson Poetry Prize

How does consciousness inhabit liminal spaces? In Jeffrey Harrison’s Between Lakes, the death of the speaker’s father places him in the ever-shifting zone between the living and the dead while also sending him back into his journey to manhood. Old arguments are reimagined: What does it mean to be a man? What does it mean to be a participant in one’s life as well as a witness and recorder of the lives of others? The exploration of these questions leads to new discoveries, including the way time reshapes the vision of one’s life and alters relationships, remaking a shared history. Harrison refrains from explanation, instead offering detail after trustworthy detail—less to prove a case than to imagine a life true to the original. Whether observing nature with steadfast precision or sensing the presence of his absent father while doing chores, Harrison sings the songs of experience in late middle life.

The night before my father died
I dreamed he was back home,
and I in my old room
on the third floor, and he
was calling up to me
from the bottom of the stairs
some advice I couldn’t hear
or recall the next day when,
standing over him
back in the ICU
full of the chirping of machines
we had decided to unplug,
I remembered the dream
and heard him call my name.