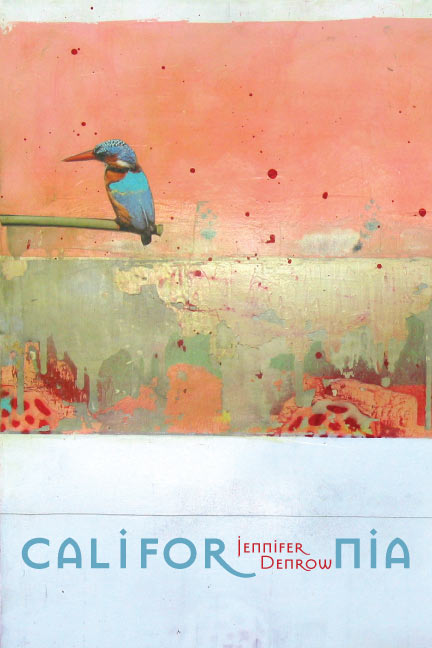 Jennifer Denrow’s California, a tragicomic collection arranged in three “acts,” explores the obsessive nature of humanity while calling in to question the creation of our realities: “You put your thumb in front of your eye. / This is the world now,” writes Denrow in the second act. In the third act, a section comprised of letters between the late ventriloquist Edgar Bergen (father of author Candice Bergen) and his dummy Charlie, Denrow delves deeper into this question of created reality. In one poem, the dummy instructs the ventriloquist on how to be real: “You’re allowed to move your lips. / I will teach you to become human…” Interspersed with quotes from Candice, (“Because he was nothing without my father.”) the poems carefully navigate the murky waters of where art and artist begin and end. “Does anyone ever call you Edgar?” the ventriloquist asks. “Sometimes / they call me Charlie just to be cruel.”

Varying between long, overflowing lines and short, truncated lines, the poems in this brilliant debut collection ventriloquize the tangential and fragmented way we think. Images recycle obsessively as Denrow’s speakers fixate on the sky, birds, trees, and in the title poem, “California”: “If California didn’t exist, I’d still want to go there,” the narrator tells us before her dependency on California becomes a question of sanity: “I suspect that I’m the problem. / He says I want to abandon our animals; he says I’m crazy. / I don’t feel like I’m crazy / I just feel like someone who wants to go to California.” The reader understands that it is not California the speaker craves specifically, but rather an imaginative departure. These speakers endeavor to find significance in the world around them, and while they often cannot, they continue to struggle towards a resolution for this inability. Denrow’s labyrinthine collection, where you can’t tell the dummy from the ventriloquist, the state from the State, whirls us around its prison of language and imagination, wheeling towards attempted escapes.

You can put anything in the sky.

You can put yourself in the sky.

And if that doesn’t work,

You can use a bird.

There is so much to the world.

When I tell people about the sky