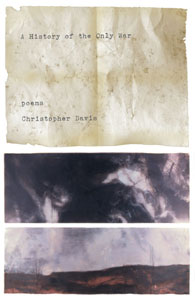 Christopher Davis is the author of A History of the Only War (Four Way Books, 2005), The Tyrant of the Past and the Slave of the Future, which received the 1988 Associated Writing Programs Poetry Award, and The Patriot, which appeared in 1998 in the University of Georgia Press Contemporary Poetry Series. His poems have appeared in many journals, including American Poetry Review, Black Warrior Review, Colorado Review, Denver Quarterly, Fence, Harvard Review, and The Journal and in several anthologies. Born in Los Angeles, he received an MFA from the Iowa Writer’s Workshop in 1985, and is now an associate professor of creative writing at the University of North Carolina at Charlotte.

A History of the Only War