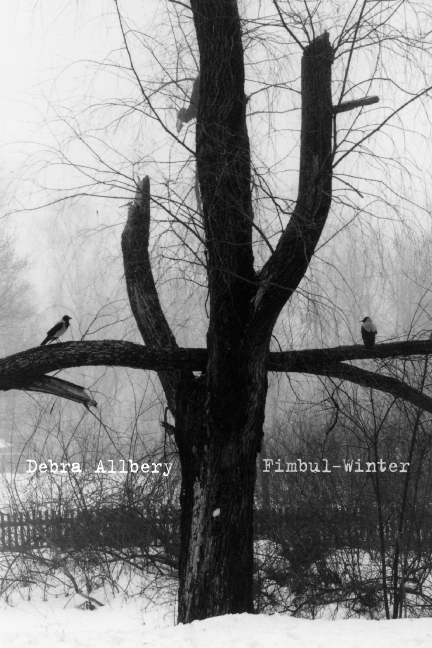 Debra Allbery’s Fimbul-Winter opens with epigraphs from Cormac McCarthy and Robert Walser: “Everything is necessary. Every least thing…” and “To forgo something, that also has its fragrance and power.” Allbery’s lyrical poems traverse the terrain between what persists and what is “long gone,” between “the promise with its pulled thread” and “the wind that sang through the weave.” They exist in the undone and unspoken (“What is mine now is only what I keep to myself”) and in “the quiet blue of sleep between two dreams.”

Between the poles of what is relinquished and what endures lies the fimbulvetr of the title—Norse mythology’s “long winter”: “…Ahead, just the frozen wreckage/ of another lake, broken and buckled in the land’s tight embrace,/ jutted plates of ice like shattered tablets,/ smashed prows caught in gray-pearl cubist waves.” Paying homage to sources as diverse as Anglo-Saxon and T’ang Dynasty poetry, Emily Dickinson and Sherwood Anderson, the blues and Joseph Beuys, Allbery’s lyrical poems draw sustenance from art, from the “moored unmooring” of motherhood, and from the “splinter song, old saga” of the harsh landscapes themselves.

You want to tell this story
without touching anything.
The glass unsmudged, the great river
still frozen. Or if it was raining then,

There are no people in this story,
no one you’d know. It’s January,
March, that fine gray suspension
before the thaw. It’s a long walk,
that’s all, hands deep in the pockets,

rough wind of diesel and prairie,
years go by. You carry a few words
like compasses, that’s all, like coins,
bright eye-pennies, their cool weight
precise in the palms.