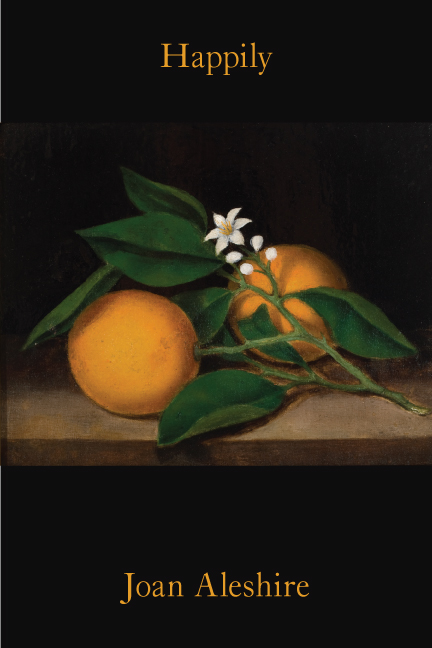 Happily, Joan Aleshire’s fifth book of poems, examines a childhood of privilege and difference in a remarkable Baltimore family during the 1940s and ‘50s. The collection offers vivid glimpses of 20th century history as it explores the trials, challenges and joys of relationships within the family and beyond that have influenced the developing consciousness of a particular self in the world.

Happily strolls through an American half-century in which “the fear of atom bombs would make us / crouch under our desks” and changing cultural values like “The Elvis Argument” and a mother’s “Are you going out in THAT?” led to family rifts. Aleshire’s evocative poems bring to life, in measured vignettes, a time of great upheaval, but they also offer a wise reflection on the power of memory and narrative. In the opening poem, a story of a fall from a horse told to a granddaughter who “sits riveted / by this slip from safety,” while Aleshire’s own childhood is remembered as imaginative games played amid “soldiers in fancy uniforms / killing one another in etchings that lined the upstairs hall.” In one poem, the cleaning-out of a bureau yields tender family secrets in the form of handwritten notes; in another, finding “there’s no one left to ask, of the ones / who might remember,” the narrator turns to her imagination, reminding us that poetry, like memoir, binds people together as audiences, listeners, and tale-tellers: if it’s often the case that “the camera preserve[s] us,” Aleshire’s poems set pictures and details in rhythmic motion.

As she described it,
that summer was the hottest ever.
Two months pregnant, too sick

In the album,
at the beach, she leans back
on her elbows, stretches out
in a modest but revealing suit
that shows her thickened waist.
She wears dark glasses with
stylish light frames: carefree,
all our life before her.

The Yellow Transparents
Litany of Thanks
Days of Our Lives