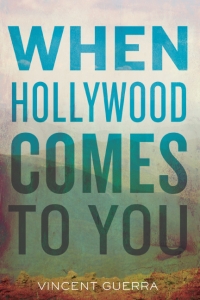 When Hollywood Comes to You

When Hollywood Comes to You, Guerra’s debut collection, explores the conflict between the story we tell ourselves about our life (“I have participated / in a series of anticipations since / my birth, each with its own measure / of worry. Each with its own / power of imbuing worth.” (from “Lost in the Trinket Machines”)) and the actual, everyday occurrences that makes up our life, which, when looked at closely, is often surprising in its oddness, silliness, and sometimes mercy. Guerra looks at how we create meaning in our life from the mundane (from roadside garbage to the person in line behind you at K-Mart to odd names of ordinary-looking plants) and how this meaning can be put in jeopardy by events like illness. The poems evoke the loneliness and anxiety of not living up to our life story as well as the transcendent feeling when these two lives align. As he says in “No Class Enjoyments”: “I, too, enjoy the day and that all the ocean’s refuse and animal froth I used / to fear as a child…I don’t fear anymore, / that I walk among the highway rubble–– / the honeycombs of windshield glass, shreds of rubber, a fast / food wrapper’s flattened wings––along the roar of the shore: / these are reason enough to feel / calm and cheerful.”

“The Television Detective’s Red Hair” from When Hollywood Comes to You:

Is carnival light. Is morning’s worn out arrival for the victim’s parents. Is coffee in a styrofoam cup and packets of sweetener the pink and blue of baby’s clothes. Is an abalone glow in a little brother’s bedroom window. First, the bad news. After walking a wide row in a wet field poking the soil. Is the loss that brings the weather on. That boxes up belongings. In the drone of the day. In the din and double-talk. Doldrums of work and feeling useless. Something resurfaces in us. A partial print. A partial plate. And her voice as plain and sure as a Texas porch. The taciturn of sacred. Waiting alone in a dreary car. In the orange light outside the suspect’s apartment. You have the right to remain as you are. Or pursue that noise. Through the cracked door of the pines. That strain in the lake’s distortion. Song massaging the feeling back in. What is worth our devotion. What charges us. A charmed sequence of words. The jangle. The strum. Truth and beauty. And what have I done with my life. Is the sheer of decision. Is the from here on out. Is one’s own thought. One’s own moment. This is the good news.