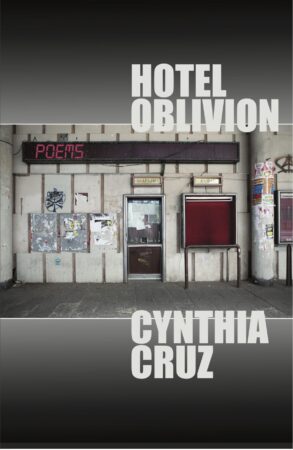 A specter, haunting the edges of society: because neoliberalism insists there are no social classes, thus, there is no working class, the main subject of Hotel Oblivion, a working class subject, does not exist. With no access to a past, she has no home, no history, no memory. And yet, despite all this, she will not assimilate. Instead, this book chronicles the subject’s repeated attempts at locating an exit from capitalist society via acts of negative freedom and through engagement with the death drive, whose aim is complete destruction in order to begin all over again. In the end, of course, the only true exit and only possibility for emancipation for the working class subject is through a return to one’s self. In Hotel Oblivion, through a series of fragments and interrelated poems, Cruz resists invisibilizing forces, undergoing numerous attempts at transfiguration in a concerted effort to escape her fate.

What is a fragment, a found
postcard, ephemera, ruin or a photograph.
For example: Doris Peter’s “Children
collecting scrap metal, George Washington Street,
1997,” Russian. Or a Che Guevara montage
on dream board in the sweetshop, Neukölln.
Why glean, why assemble, or
how does accumulation keep.
How does getting it all down
do the same work as making. And how
is the gluing of words together
not unlike taking something beautiful apart.
In the afternoon, on Saturday,
I bought a pale blue dress from Humana
and walked alone, home, in it,
through the parades of my emptiness.