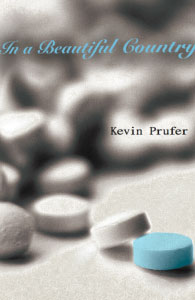 In a Beautiful Country

In a Beautiful Country, Kevin Prufer’s fifth collection, examines America’s suburbs and exurbs where “The thrown newspaper fails / to reach the steps.” Taking place beside hospital beds and amid outlet malls, within earshot of military bases and in light of horror movies, these poems mourn the loss of parents, friends, and our sense of our nation. A follow-up to the critically acclaimed National Anthem (Publishers’ Weekly 5 Best Poetry Books of 2008, Poets’ Prize Finalist), In a Beautiful Country takes us into the new century carrying our gasmasks and our pulsebombs. “Give them to your children, they’re useless now” intones a God as unable to understand human dejection as we are to comprehend His plans—or to know the lives of distant strangers who have “fallen that morning or early afternoon, / according to numerous conflicting reports.”

In a Beautiful Country offers a bittersweet love song for the possibility of a country that has become a military complex where familiarity makes the gun’s “click of metal in the chamber” sound softer than “the plummet of leaves.” Yet amid causes for despair, these poems hope for futurity and posterity. Turning to the ballad-like rhythms of Thomas Gray, Prufer critiques romanticized visions of art while asserting poetry’s role in citizenship. In the final poem “Post Script,” poems and receipts and secretaries and snow flakes blend together: “Here are the poems I have gathered / and this is the receipt.”

“Love Poem,” from In a Beautiful Country:

National Anthem
Churches
How He Loved Them
The Art of Fiction