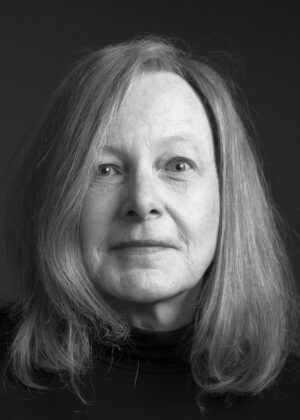 Joan Houlihan is the author of six books of poetry: It Isn’t a Ghost if It Lives in Your Chest (2021); Shadow-feast (2018), which received a 2019 Must-Read distinction from the Massachusetts Center for the Book; Hand-Held Executions: Poems & Essays (2003); The Mending Worm, which received the 2006 Green Rose Award from New Issues Press; The Us, which received a Must Read distinction from the Massachusetts Center for the Book, and Ay (2014), a sequel to The Us (2009), both from Tupelo Press. Houlihan received her BA and MAT in English from University of Massachusetts in Amherst, and she has taught at Columbia University, Emerson College, and Smith College. She currently serves on the faculty of Lesley University’s Low-Residency MFA in Creative Writing Program in Cambridge, Massachusetts and is Professor of Practice in Poetry at Clark University in Worcester, Massachusetts. Houlihan founded and directs the Colrain Poetry Manuscript Conference. She lives outside of Boston.

It Isn’t a Ghost if It Lives in Your Chest