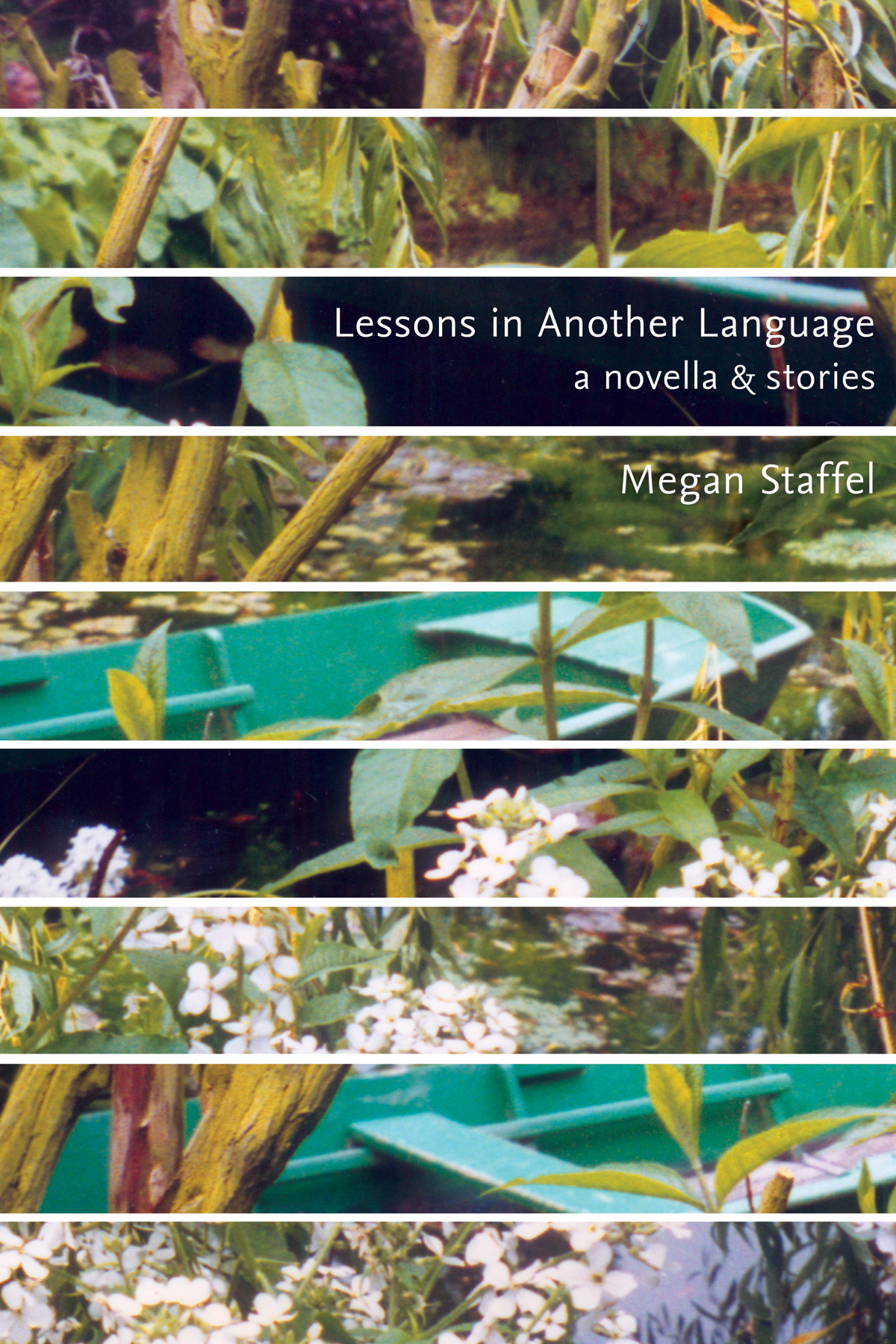 Lessons in Another Language:

A Novella and Stories

Not since Alice Munro’s The Beggar Maid has there been a book which so articulately reveals the complex
emotional spectrum of children caught in the adult world. The novella and four stories in Lessons in Another
Language give voice to adolescent protagonists who inhabit rich emotional and sensual worlds as they
navigate the wreckage created by the adults meant to be caring for them. In “Daily Life of the Pioneers,” two
misguided parents send their children to an austere summer camp designed to mimic the lives of the “pioneer
children […] your diet will be raw vegetables which are very tasty and very healthy.” “’Why?’” asks one of
the children, a question that resonates through Staffel’s stories as they present the often-naïve ways we adults
project our lives and anxieties onto our children. Charlotte, newly arrived at a Southern college, wanders into
town and is seduced by a thirty-something guy with a car because “the way he looked at her made her feel like
maybe she wasn’t the only refugee. Like maybe he knew her same troubles.” Lessons in Another Language
weaves evocative narratives of abandonment and confusion, of hope betrayed more often than fulfilled.

Nathan Bogmore, the protagonist of the opening story, “The Linguist,” is literally learning a new language,
studying French verbs in the country, where his artist mother has dragged the family on a “working vacation.”
Likewise, all Staffel’s characters find themselves getting “lessons in another language,” the language of
adulthood, of danger and opportunity. Circumstances—an enforced relocation, a trip home, the arrival of new
neighbors and with them a new best friend—veer these characters towards a trouble they’re one step behind
understanding. In the mind of Sam Sperry, the contemplative voice at the center of the tour-de-force novella
“Natives and Strangers,” “It was a big, complicated mess, and the only messes Sam had experience with were
the simple ones that got cleaned up with angry voices, a slap on the face, or a sink full of dish soap.” Staffel’s
noir stories are exquisite, gripping observations of lives humbled by the power of the rural land that surrounds
them, of people haunted by the enormity of their longings. Their lessons and the language they teach us offer a
new and compelling translation of what it means to be a family in the modern world.

From “Natives and Strangers,” from Lessons in Another Language:

School had ended. Now Sam would have only himself to depend on. For two months, there would be no
regular meals and nothing to take him away from the pile of buildings after the bend on Quigg Hollow Road
where the Deer Cutter sign stood at the silver mailbox.
The way he saw it, reading and math were useless. Science wasn’t any help either. History maybe. His
father was a Vietnam vet and history might help explain some things. But with summer vacation, the days
stretched forward in endless repetition, his mother napping through the warm afternoons, which meant she was as
good as gone when his father was raging in the kitchen, and explanations didn’t matter. He had to get low, stay
quiet, very, very quiet, quiet as the dog Sunshine when he was watching a bug, and keep to himself. Not talking,
not saying anything except those times when he was asked something directly. Sometimes he felt he was no
different from the animals, including the insects, the birds, but mostly the insects. He was no different, certainly
no better, and that wasn’t a bad thing. It got him through the summer and up to the day school began again when
he could rise from insect to human and think his way into all of those problems they tossed out. Like, what is the
square root of 77? In summer it didn’t make any difference if it was 8.7 or minus 3. It made no difference at all.
Those were the things he might blame for the emptiness of the days. Or maybe he just wasn’t the type
to have friends. That summer, besides being a bug and staying low and quiet, he did a lot of riding on his bike,
miles and miles, and everyday he stopped in the marsh across from the house at the end of Quigg Hollow Road
to watch. First the For Sale sign had appeared. That’s what caught his interest in the first place. Who would
want to live on Quigg Hollow where it was only Sperry, the deer cutter, and farther down, a bunch of hardly
used hunting camps? But the previous fall somebody had built the house on the stretch of brushy land just off
of 417, and then on June first, the For Sale sign appeared.