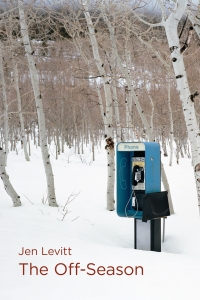 The Off-Season was a finalist for the 2017 Golden Crown Literary Society Award in Poetry.

The poems in The Off-Season are populated with things—‘90s TV shows, mix-tapes, crosstown buses, winter
beaches—signifiers that trace a trajectory from girlhood to adulthood and bring to the surface feelings and
desires that ordinarily stay hidden. We witness the strangeness of modern life, relive our own adolescent
awkwardness and listen in on conversations with dead poets, TV characters, family members and intimates.
With humor, fierceness and generosity, The Off-Season grapples with the question of how to be in the world.