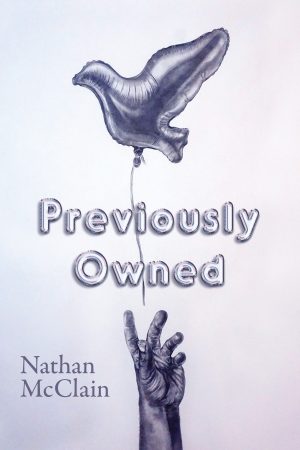 In his daring sophomore collection, Nathan McClain interrogates his speaker’s American heritage, history, and responsibility. Investigating myth, popular culture, governance and more, Previously Owned connects a villanelle cataloging Sisyphus’s circular workflow to a Die Hard persona poem critiquing police brutality and joins complex pastorals to the stunning sequence entitled “They said I was an alternate,” which recounts the author’s experience serving on jury duty. Though McClain’s muscular lyric explores a wide range of topics, the intensity of his attention and the profundity of his care remain constant — the final page describes a young girl in a diner, ringing the bell at the host stand, “just to hear it sing, the same / song, the only song // it knows.” Insofar as this collection scrutinizes one’s own culpability and responsibility in this country, interested in the natural world and beauty, as well as what beauty distracts us from, it does so in the hopes of reimagining inheritance, of leaving our children a different song.

“What You Call It,” from Previously Owned

…The peach was simply a peach,
and there for the taking,

which is often said of an object that has gone
unwatched for too long, susceptible

to trespass, which happens
first in the mind, and happened first

because of fruit,
or so says The Good Book

if you believe in such things. Knowledge,
which a poet once called “historical,” too

a trespassing of sorts, the proof of which
perhaps best shown in how one

or rest, secretly, and by firelight.
There are things nearly impossible

to forget, having so trespassed…