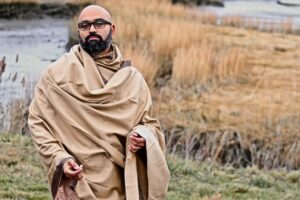 Rajiv Mohabir, an immigrant to the United States, is the author of The Cowherd’s Son (Tupelo Press 2017,
winner of the 2015 Kundiman Prize; Eric Hoffer Honorable Mention 2018) and The Taxidermist’s Cut (Four
Way Books 2016, winner of the Four Way Books Intro to Poetry Prize, Finalist for the Lambda Literary Award
for Gay Poetry in 2017), and translator of I Even Regret Night: Holi Songs of Demerara (1916) (Kaya Press 2019)
which received a PEN/Heim Translation Fund Grant Award and received the Harold Morton Landon Translation Award from the Academy of American Poets. His memoir Antiman (Restless Books 2021) received the Restless Books’ New Immigrant Writing Prize. He received his PhD in English from the University of Hawai‘i, Mānoa and his MFA in Poetry from Queens College, CUNY. Currently he is an Assistant Professor of poetry in the MFA program at Emerson College. He lives in the Boston area.