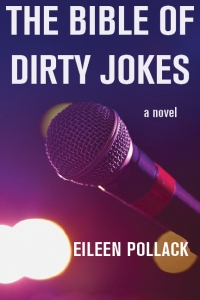 The Bible of Dirty Jokes

In The Bible of Dirty Jokes, Eileen Pollack (Breaking and Entering, A Perfect Life) brings to life the hilarious and moving history of Borscht Belt comedy, Catskills resorts, and the notorious Jewish mob, Murder Inc. In a novel that reads like a cross between The Sopranos and a Sarah Silverman special, Pollack bestows on American literature a protagonist for the ages, the wisecracking, starry-eyed, endlessly generous and forgiving Ketzel Weinrach. On a reeling, roundabout hunt for her beloved brother, Potsie, who has gone missing in Las Vegas, she finds herself in ever weirder and more unnerving locations. She uncovers dark family secrets, buried bodies, and repressed memories and comes to see her failed comedy career and her deception-riddled marriage to the late Morty Tittelman, self-styled professor of dirty jokes and erotic folklore, in new and wonderful ways.

Pollack’s most inventive book yet, The Bible of Dirty Jokes combines her wry, empathetic commentary on contemporary America with her gift for comic about-turns. Part risqué romantic romp, part murder mystery, this big-hearted, provocative book refuses to sit quietly in the corner; its heroine persists through strip clubs, secret New Jersey lockers, and warehouses of ill-gotten Rat Pack artifacts. The way ahead is far from pretty, and Ketzel doesn’t emerge unscathed. But as we travel by her side, we end up one step closer to the answer to the eternal question: Can a woman tell a dirty joke without the joke being on her?

From The Bible of Dirty Jokes:

“. . . As a little girl, I understood only that the comics who performed at our hotel were heroes. When they strutted across a stage, everyone paid attention, while no matter what I did, no one seemed to see me. I started collecting jokes in a three-ring binder. I would transcribe a comedian’s best routines, even his second best, or his third, then practice retelling them to the mirror until I had perfected each inflection, every eye-cross and pregnant pause. Back when I was ten and Rodney Dangerfield was still an aluminum-siding salesman named Jack Roy who worked the Hospitality’s stage for free, I could mimic that droopy lower lip, that heavenward gaze, and that sly self-mocking whine. I tell ya, I get no respect. I was such an ugly kid, my mother breastfed me through a straw. My wife, her favorite position is facing Bloomingdale’s. And this girl I’ve been seeing? I say to her, ‘Come home with me, baby, and I’ll show you where it’s at,’ and she says, ‘You better show me, because last time I couldn’t find it.’ . . . The next time these same performers came to play our hotel, I would treat them to my imitations of their own routines. Oh, how they hooted and how they howled. Ketzel, you’re such a natural! You’ve got the timing down pat. No one could teach a person to make the faces you make, to move the way you move. You’ll carry on single-handed after all us old farts are dead.
That is, until I revealed that I wanted to be a comic, too. . . .”

In the Mouth: Stories and Novellas
Breaking and Entering