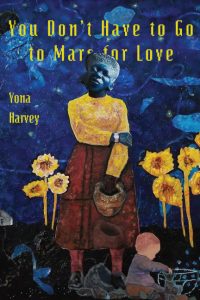 You Don’t Have to Go to Mars for Love

Winner of the Believer Book Award in Poetry

Reviewed in The Pittsburgh Post-Gazette

Reviewed in The Pittsburgh Book Review

The poems of award-winning poet Yona Harvey’s much anticipated You Don’t Have to Go to Mars for Love follow an unnamed protagonist on her multidimensional, Afro-futuristic journey. Her story stretches the boundaries normally constraining a black, female body like hers. Half-superhero, half-secret-identity, she encounters side-slipping, speculative realities testing her in poems that appear like the panels of a comic book. Music directs readers through large and small emotional arcs, constantly re-troubled by lyric experimentation. Harvey layers her poems with a chorus of women’s voices. Her artful use of refrain emphasizes the protagonist’s meaning-making and doubling back: “Who am I to say? The eye is often mistaken. Or is it the mind? Always eager to interpret.” Our hero gets captured, escapes, scuba dives, and goes interstellar, and she emerges on the other end of her journey renewed, invoking the gods… “Taunt the sharks & when the glaciers get to melting, / all God’s Rivers we shall haunt.”

You never wear cologne. You give
& you give & you give & you give.
& they take from you.That’s their business.
You are mine. Or so you say
with a wink. I want to tell that stupid girl
to shut the hell up about the sonnet.
But you shrug. Just a girl, you say.
You once saw seabirds in her
skirt, a blue, irregular outline,
a neglected island. & anyway, cologne
is for boys who need a hint. Just don’t
tell their young lovers too soon. Give them
the feathered headdresses & coconuts they imagine,
the little trees that bear chocolate fruit.