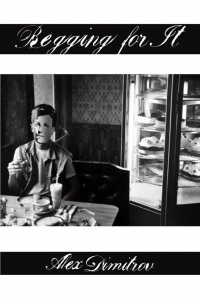 Alex Dimitrov leads us through the streets, bridges, and bedrooms of New York City, sometimes as far away as Buenos Aires and Iceland, and as close as our own darkest corners. A Bulgarian immigrant, Dimitrov writes as both observer of and fervent participant in an “American youth,” as his speakers navigate both the physical and emotional landscapes of desire, intimacy, and longing—whether for a friend, a lover, or a self, “Saint or stranger, I still recklessly seek you.”

Throughout the collection, we are consistently rooted in place: a seemingly American place, a New York place, an emotional space in which “the body becomes a cage you can’t feel your way out of.” In one poem, we meet Hart Crane at the St. Mark’s Baths; in another, the speaker is reading Montaigne while a car crashes into the Gowanus Canal. Dimitrov invokes Rimbaud, Proust, Wilde, Barthes, Sontag, even James Franco. A contemporary coming-of-age in which the speakers are as much immersed in the present as they are plagued and enchanted by the past, this collection is very much alive. And even as Dimitrov assures us that “we were given more than we can drown,” he warns, almost seductively: “Don’t worry. No one is spared.”

“Sensualism,” from Begging for It: