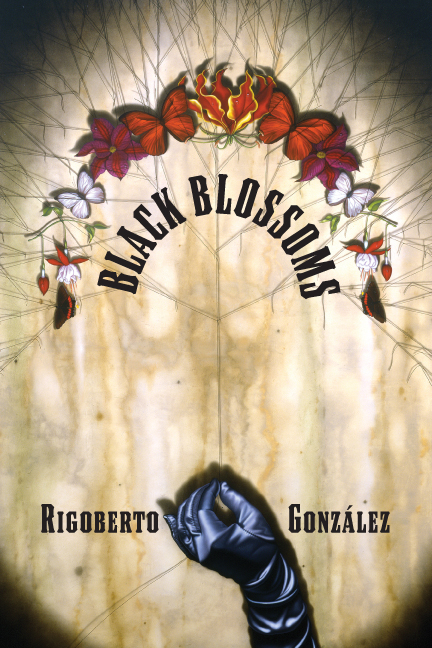 Black Blossoms explores the private lives of working class women of color, their difficult journeys. A companion to González’s Other Fugitives and Other Strangers (winner of the Poetry Center Book Award), which recounted male lives, Black Blossoms interweaves sex, death and violence—the tragedies of loving and losing—in surreal fairytales and magical biographies. Opening with “Mundo de Mujeres,” Black Blossoms first tells the famous story of androgynous German dancer Anita Berber, whose “autobiography of red begs a coda.” “The cut in her toe” is just one of the moments when Black Blossoms attends to the blood that beats through the veins of our lives, “how you’ll feel your way through/ excursions and bleed to death. But that’s existence: the opposite of coma.” In Black Blossoms, González delves into the breath-taking powers of language, the way a word can have a “black magic,” capturing what we allow ourselves to see: “[a] stunned passerby will drop a bottle of cranberry juice// on the pavement. The others will blink, surprised it/ doesn’t shatter, holding in the red lake in its lung.”

In the first of two extended series, “Floreo,” González looks to the floral, following Anne Sexton’s hope—“I would like to think that no one would die anymore/ if we all believed in daisies.” “Your life began this way, with the dream of orchids, bone-white, gristle-/ like, pollinated by flies,” he writes, his imagery drawn from earth as much as romance, a magical realism steeped in death and the body: “You dip a finger in your grandmother’s socket and paint/ the scarlet back into her cheeks. Invent a name for this resurrection:/floreo.” In the second series, “The Mortician Poems,” González continues to interweave femininity, death, and vigor as he depicts the mortician’s bride, who “dab[s] perfume inside that soft warm space behind my bra,” and his daughter, who reveals “I stop my heart. One skill I’ve mastered here is playing dead.” The body surfaces everywhere in this meditation on lust and longing; su corazón se iba llenando de alas rotas y flores de trapo, as one epigraph from Federico García Lorca reads, “His heart keeps going, filling itself with broken wings and paper flowers.”

I push open the window. Pigeons blend into the stone
ledge as their small ruby hearts fade to charcoal.

Delicate as ash, they erode with the wind
and leave the white daisies of their droppings. Stranger

birds clutter the city sidewalks, their gray wings
crushed into exotic fabrics too thin for winter.

My socks are yellow cotton, the bedroom carpet
deep. I step out of my footprints easily.

From the mantel my mother weeps for me
on the day of my birth. In every other photograph

she mourns me. Her eyes melt like snow
on the street, always darkening. The Labrador

the television screen. The pope arrived
on the Mexican peninsula to a parade

of teary-eyed saints. My mother had been
fucking a stranger beneath the sheets.

and my faith began to fade. All things holy
came in chalk or plastic after that

and, too, the small god the priest placed
in my mouth finally dissolved

the night my mother greeted her final star.
When she cried out I confused the sound

with that groan of ecstasy the time I
found her with her lover. What burden to carry

her loneliness until my own demise. Motherless,
I have lived detached from the world

long enough. Should I decide to take
flight, I will die by day, divide the sky

into what will fall, what will rise. One stunned
passerby will drop a bottle of cranberry juice

on the pavement. The others will blink, surprised it
doesn’t shatter, holding in the red lake in its lung.

Unpeopled Eden
The Book of Ruin