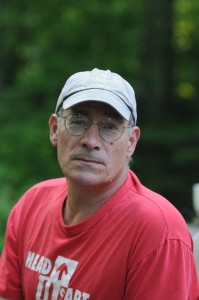 Daniel Wolff, as poet, has published three previous collections and a chapbook, made appearances in many
literary magazines, been anthologized, collaborated with dancers, sculptors, and print-makers, mailed fictitious letter-poems, done performance pieces, printed broadsides, tacked poems up illegally in subway cars and installed them in peep-shows. He’s read across the country as well as on air. He’s also published a number of award-winning books as a non-poet.

The Names of Birds