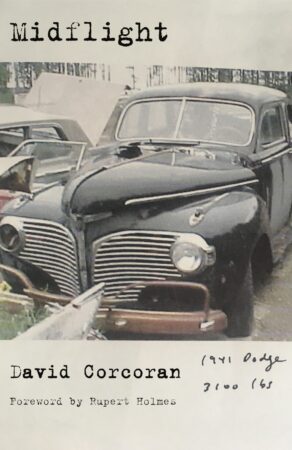 A posthumous collection, Midflight collects the poems written by beloved science editor and journalist David Corcoran in the latter part of his life. Idling in a space between the pastoral and the ordinary, Corcoran’s lyrical world maps the sublime mundanity of nature while exploring memory, dreams, and consciousness itself. Corcoran’s lines abound with figures living and long deceased, with the dead walking onstage as if they never left. Describing the accident that killed his father when he was a toddler in “Here,” Corcoran writes, “the door [opens] in midflight / and [pitches] him out.” In “Last Questions,” he asks, “Are you my brother or / a mockingbird?” While these haunting, vivid poems have an aching prescience, imbued as they are with the awareness of human ephemerality, the gift they proffer, to the writer and the reader at once, is the sense of finding oneself midflight, in midair, betwixt sky and ground, in the free fall of being—going and going and never gone.

WHEN YOU DIE THEY’LL AUTOPSY YOUR BRAIN

In one quadrant: whiskers, insect husks,
syringes, wet ashes. In the second:
an illuminated alphabet—Apollo,
Bathysphere, Chaos, &c. The third,
your parents, shrunken & mummified,
hair & fingers eerily lifelike. And finally
a newborn, radiant as alabaster,
fragile as eggshell, who you are.